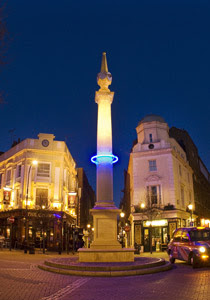 The project is intended to highlight the issue of rising sea levels, with the blue rings illustrating how high sea levels will have climbed (28 metres) in a thousand years' time, should we fail to heed the threat of global warming.
PLUNGE has been created by Michael Pinsky and produced by Artsadmin and LIFT (London International Festival of Theatre) as part of the Imagine 2020 network programme. It has been supported by the National Lottery through Arts Council England, the European Culture Programme, Trust Greenbelt, WWF-UK and the Big Give.
The artwork will be on display until 4th March 2012. Debate around the issues is encouraged on the project website at http://www.plungelondon.com/

Michael Pinsky is a British artist specialising in installation and public art. He has exhibited extensively in galleries and festivals including TATE Britain, the Saatchi Gallery, the ICA, London; BALTIC, Gateshead; Centre for Contemporary Art, Glasgow; Modern Art Oxford, Liverpool Biennial, Archilab, Orleans; CCC, Tours; France, Armory Centre of the Arts, Los Angeles and the Rotterdam International Architectural Biennial. He has undertaken many residencies that explore issues which shape and influence the use of our public realm and combines the roles of researcher, urban planner, activist, concerned London resident and artist. Through video, performance, mapping and programming, Pinsky responds site-specifically to physical and sociological space, frequently to highly dramatic effect.
Posted by Suzanne Heath at 05:01